No longer fighting for a chart place, singer-songwriter Colin Vearncombe is taking control of his distribution online, as he tells Sean McManus in this interview from Making Music in 2000. 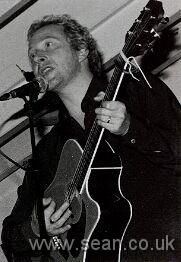 Wherever you go, there are songs that follow you. One of those songs is Wonderful Life by Black, even now broadcast on radio stations worldwide and often piped into lifts in swanky hotels like it's part of a global culture. Colin Vearncombe is stepping out from behind his former monicker 'Black' and revisiting Wonderful Life and other past singles on his album 'Abbey Road Live'.

The album aims to recreate the spirit of his recent tour, the first in six years. "Playing live will always teach you something," he says. "Even if it's what not to do. I wish I had forced myself to do solo shows a lot earlier. I shied away from doing something as scary as going on stage alone with a guitar. Now, having done it, what you get immediately is a sense of where the dead spots are in a song."

"I could see that a lot of the time I was using studio techniques to mask inadequacies of song." He picks the songs with the best lyrics to play live and performs without bass instruments so that the lyrics can be clearly heard. "You sing a line and get an immediate response," he says. "If the words aren't up to it, then you're just babbling into a void."

The new album is being distributed exclusively through Colin's website. "The arithmetic speaks volumes," Colin says. "I'd only have to sell 25% of the volume of copies to generate the same amount of income. Bearing in mind that I'm not trying to compete in the chart game, the internet generates possibilities more important than anything else. When you've made your record, you've made your point. The next step is about selling as many copies as you can. They're linked processes, but I don't think you should be thinking about that when you make the record."

Using his real name will also help Colin to promote his music on the internet. "If you go onto the internet and type in 'Colin Vearncombe' you will almost certainly come straight to me. If you put in 'Black' you'd get about 50,000 places and only one of them would be me."

I had about 35 or 40 songs that could have come on the second album, but it obviously wasn't enough.

Running his own distribution also frees him of the pressures associated with major label releases, Colin says. "If you try to play the game by the industry rules, you will not have enough time to write the songs for a good enough record to keep the momentum going. You'll be hanging around in TV studios, waiting to pretend to do the thing that you do. I did 18 months promoting Wonderful Life. I had about 35 or 40 songs that could have come on the second album, but it obviously wasn't enough. That's the reason it wasn't as successful."

Although this is the first internet-only distribution, Colin's previous two albums were on his own label Nero Schwarz. "I wanted to take responsibility for my own actions in all sorts of ways," he says. "It was very nice to have the financial clout that comes from being signed to a major. There isn't another business where you could get someone to invest half a million on the basis of something like a few songs. But when you look at what they get for it if it works, you're giving it away really cheaply. They're making fortunes at the point where you've broken even. That's the risk that they take. If you're prepared to take that risk yourself, you don't have to give up on the album if the second single doesn't work. You don't have to be jumping off a building because you didn't get Radio 1 playlisted. You can work it as long as you can make money off it."

When dealing with major labels, Colin advises songwriters to haggle for an advance of at least £15,000 a year. "If they balk at that," he says, "it means they don't think you're capable of selling 30,000 albums or 90,000 singles a year. That's not an awful lot." With publishers sub-licensing to contractors in different territories and each link in the chain holding the money for six months, it can take two to three years for the artist to be paid. "By that time, a whole lot has disappeared. This is perversely also the reason why some publishing companies pay 110%. Paying quarterly accrues so much interest that they can pay more than the songs generated."

Although he says he tries not to overanalyse past recordings, he still recognises the debt he owes to 'Wonderful Life'. "It opened a lot of doors," he says. "Let's not forget that my situation is coloured by the fact that I have had some hits and they do continue to earn money. It's a big world and there are a lot of radio stations and most of them pay when they play."

"It always baffled me why people complain about the tour-album-tour cycle," he says. With most moaning pop stars having both ample opportunity and money to go independent, Colin says: "Barring that it's a lot of effort, the only reason I can think that they didn't do it is that what became important was being famous, being perceived as successful rather than actually being successful, which is just about being happy."