All it takes is one chord. After a couple of hours patiently waiting and listening to techno, the crowd claps politely as Jesus Jones takes the stage on their first tour in four years. But that first chord changes everything. The place goes mental, a churning mass of sweat and energy fighting for release. At once it is the least comfortable, but most elated place to be. Singer Mike Edwards gurns and grimaces his way through the hits, spooky eyes afire. Iain Baker abuses the keyboards, triggering the sharp industrial samples that characterise the band's sound. The drummer and guitarists throw themselves equally into the show with abandon, flicking sweat in their wake. 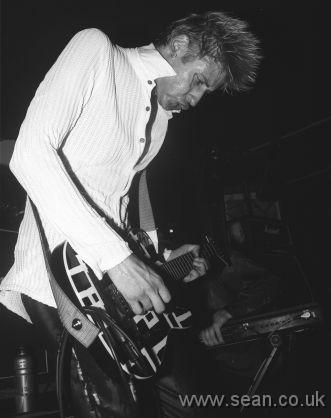 It's nearly a decade now since the band started out. When they first mixed samples with hard rock, it was like alchemy. Now, it's as commonplace as cookery. The new material uses the familiar recipe of guitar rock garnished with techno-samples to give it a kick. Tracks like 'Run on Empty' and single 'The Next Big Thing' extend the band's repertoire of antagonistic anthems it's okay to hum. They blend perfectly alongside closing oldie 'Idiot Stare', opening hit 'International Bright Young Thing' and debut single 'Info Freako'.

This is both the band's strength and its weakness. Jesus Jones aren't doing anything new for their fourth album, nor are they doing anything unique any more. Old fans will be pleased that the band has remained faithful to its original vision, while cynics will berate the lack of progress. Let's face it, you already know whether you like this music or not.

On stage, however, the band remains the most energetic live act. Without any special effects or theatrical stage personas, Jesus Jones inspire terrifying energy in a crowd, and breed excitement most bands can only dream of.