My Life Story's singer Jake Shillingford talks to Sean McManus about why they dismissed MP3 when releasing their first e-single.

Ideas are viral and emails are the carriers. Be they virus warnings or song parodies, emails are repeatedly forwarded between friends until a chain spanning the world has read the same words.

Imagine exploiting this network to promote your music. That's what Jake Shillingford did, leader of ten-year old orchestral pop band My Life Story. The group posted exclusive material as an electronic single on the band's website for three months, purposely leaving it in the email wilderness to go on spreading forever. 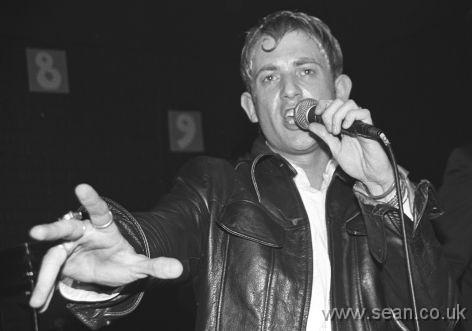 Jake Shillingford from My Life Story, performing in concert around 1996-97. More photos.

"I might well find that we've gone to number one in Lithuania when I'm 66," laughs Jake. "I would like to be able to say at the end of three months that 'If you can't live without me why aren't you dead yet' is our most widely heard single yet."

The band chose to use Microsoft's Media Player to distribute the single instead of the popular MP3 digital music format. The sound quality is 'excellent' says Jake, but the main benefit to My Life Story is that the track can't be played until it is registered with the band's website. "Say I email it to Aunt Mabel in Bratislava and she likes it and emails it to her friends," says Jake. "We can check and see that 1000 people have the single in Slovakia, can book a gig and email ticket information and roadmaps. If we get a database like that, we can go and do one-off forays. We could be the biggest band Christmas Island has ever seen."

The single has even secured radio play in Sweden, a result of DJs loading it directly from email or the website into the computer system used to program the music in the shows. In this country, Radio 1 and XFM played the single but the weekly inkies were dismissive.

"The single was released like a chart release: it had an A and a B side like a 7 inch single, it came out on a Monday and it was promoted the same," says Jake. "But the national press, especially the music magazines, don't seem to consider the internet a genuine release. It's very backwards thinking. We're getting just under 100 downloads a day. That is a lot of records in just one shop."

Unless you're Mariah Carey, people can't go into Woolworths next week to get your single. The internet gives us a permanent presence so people can still download the single.

Internet distribution offers the band greater freedom of expression. "Pop music is supposed to be the voice of the youth but it is being censored more and more," says Jake. "The B side [History of the World on Ice] was originally going to be the B side of 'It's a girl thing', our previous (CD) single, but some high street chains wouldn't stock it because it had a few naughty naughty swear words. And that was the b-side!"

Online the band has no pressure to be commercial either. "If our records are a bit self-indulgent or we want to do a three-album instrumental and if it would appeal to our fans, the internet is an excellent way to put it across," says Jake. "My Life Story have been a consistently average band. We've always gone in at number 34 in the charts and gone out the next week. Unless you're Mariah Carey, people can't go into Woolworths next week to get your single. The internet gives us a permanent presence so people can still download the single."

The single was given away for free, as a gift to the fans and also because the band didn't want to run the risk of charging while still experimenting with the technology. Jake remains sceptical about whether online distribution will ever be commercially viable. "There is still some naievety in the major labels and the record press in recognising the legitimacy of the internet," says Jake. "When that prejudice is gone, we might see bigger releases. The most important role now is in communication."

And while Jake celebrates fan websites for keeping My Life Story going when dropped by Parlophone and enjoys the connection with fans the internet enables, he still believes that bands must tour to promote the music. "The internet is all well and good, providing something that can be accessed by the whole world but you still have to be out there promoting the site," says Jake. "It's no good having a great site, superb single, available for free if no one goes there."