I've always been fascinated with 3D effects, as you might have gathered if you've read my explanation of how stereograms work. More recently, my book Cool Scratch Projects in Easy Steps included a pair of 3D anaglyph glasses and three projects you can create using them.

For a while, I've been wondering how to create an anaglyph website using just CSS. For me, the important aspects were:

If you're not familiar with the term anaglyph, it means the 3D effect you get using red/cyan or red/green glasses.

When reading about the CSS text-shadow shadow in Dan Cederholm's excellent book Handcrafted CSS, it occured to me that this could be exactly what I need...

You probably use hexadecimal colours, like #ffffff for white and #000000 for black. There is another way to express colours called rgb which uses a number from 0 to 255 (in decimal) to represent each of red, green and blue. The rgba way of expressing colours goes a step further, and includes a figure for transparency (from 0 to 1). So you could express a 50% transparent red, for example as:

rgba enables some nice effects, such as having a semi-transparent background with foreground text that remains 100% opaque. Internet Explorer introduced support for rgba in IE9, and it's supported in Firefox 3+, Safari 3+ and Opera.

For the anaglyph effect, the importance of rgba is that it enables text to overlap semi-transparently.

Here is how to use text-shadow to make a simple anaglyph effect...

As they say on the telly, put on your glasses now! You should see that text sink away from the screen.

The reason that example seems to sink away from the screen is that the red offset is to the right. If you make it to the left, then the text appears to jump out. To make it jump out, you need to give it a negative offset. The problem with that is that you're more likely to encounter problems with the shadow disappearing out of the left hand side of your content box. Make sure your content box has enough padding to keep the shadow within it. Here's an example, using an offset of -4:

Here's that 3D anaglyph paragraph (represented as an image for incompatible browsers):

The amazing thing about this effect is that the mouse pointer appears to go behind the text when it rolls over pop-out text like this. Try it!

You can change the distance that the text appears to sink into or pop out of the screen by changing the horizontal offset on the text-shadow. You need to express this offset in pixels: using em would result in the offset changing as the text size increases, which isn't what you want. From my own experiments, I think 24 pixels is the maximum comfortable offset, but it seems to take longer to focus the eyes the greater the offset, and at higher offsets the eyes can be confused about whether the image sinks or pops out. It's particularly confusing if there isn't much white space around the content. I recommend using settings of -8, -4, 4, and 8.

One natural extension of the idea is to make links appear to pop out of the screen when the mouse hovers over them. This isn't too hard to do: you just change the CSS hover state so that the text-shadow has a smaller value for the horizontal offset, changing it from +4 to -4 for example.

The problem is that because the text shadow moves to the left and the eye perceives the position of the item to be mid-way between the red and cyan images, the text appears to jump to the left. To correct that, you need to add additional padding to the left of the link in its hover state. When I change the shadow's horizontal offset from +4px to -4, adding a padding of 8px corrects that jump.

To apply the effect to your links, you just need to give them a class of poplink, like this:

The effect takes a moment to perceive, so it can slow down the use of links.

If you are using a compatible browser, you can try that effect out using the links below:

If you don't have a compatible browser, here's a screengrab showing the Social Networking book link selected and apparently in front of the others (obsolete links have been removed above but not in the screengrab below):

Bringing it all together

Here's some example page content showing it in action. It only works if you have a compatible browser, which generally means a recent browser version that isn't Internet Explorer...

H2 is behind H1 but in front of paragraph: -8px 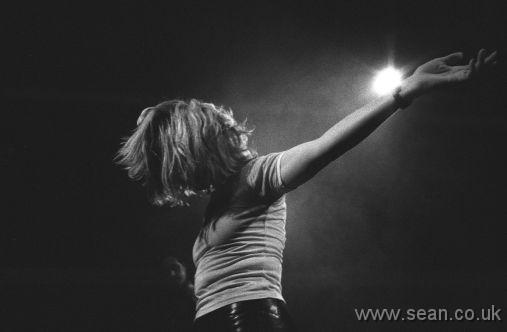