Tom Hingley talks to Sean McManus about his band The Lovers formed with Jerry Kelly of the Lotus Eaters, which bridged the time between the Inspirals and Tom's solo career. 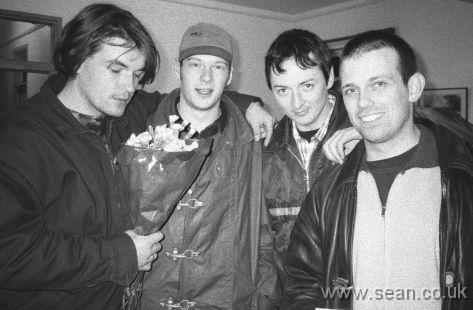 It's a brave band that calls its label Poof Records. "We called it Poof because we're not really into all that laddishness," says singer Tom Hingley, formerly of the Inspiral Carpets. "The band's called The Lovers because we're exploring all the different angles of love. Not romantic love, but love as being dangerous or something that's outside."

While Tom was recording the last two Inspirals albums, he would spend the evenings with friend and Lotus Eaters guitarist Jerry Kelly playing with samplers. Inspired by The Orb's sampled voices, they began playing with a poetry record. "We had these Australian Poets on Record," says Jerry, "with these three guys from the sixties, looking really sharp. Three of them were naff, dead embarrassed reading the poetry, but there was this one fella wearing a cravat on the cover who went 'the wind wanders in the great forest...'" Jerry's voice fades into a pompous whisper, reciting the poetry they looped.

Although the "Australian Poets" track is unreleased, it was a useful lesson in the technology. The band's first single "Work, Rest & Play" tells a teenage prostitute's life story in a sinister, breathy rap, using eerie looped effects and dark guitar sounds. The bass, played by Chris Livesey, gives the song a regular jolt. "We're trying to re-integrate the electro-acoustic sound on top of the samples and MIDI stuff," Jerry says. But the band's sound is still evolving, not yet consistent. "We're laughing really," Tom says, "because we could go away for six months and come back as anything. We could come back as a grunge band (although I suspect that wouldn't be a good career move!)" 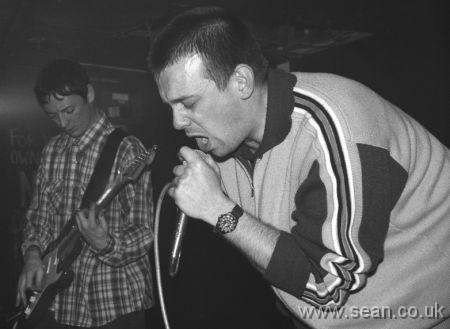 The Lovers' gigs have experimented with different song arrangements, reinventing the tunes each performance. The aim is to capture a sound that will arrest an audience listening to the radio in the background. Tom says: "Most of the time when you hear a song on the radio, it's two thirds of the way through. We want to be the band where people go 'F---ing hell! What's that?' and can't wait to find out."

As former lead singer of a 20 hit indie band, Tom would have a fast track to the A&R casting couch. But the band has chosen to set up its own small label instead, saying there are no plans to seek a record deal for some time. "The whole point of making records is not to make a living out of it," says Jerry. "It's an artistic enterprise." The label, recently re-named 'Mad Dog', has released a five track demo tape and the debut CD single. "We're doing it for ourselves," says Tom. "Waiting for an A&R man to say he likes what you're doing is like waiting for the planets to align."

Waiting for an A&R man to say he likes what you're doing is like waiting for the planets to align.

That's not to say it's easy going it alone. The band has invested its own money in studio time and is working at a loss to go on tour. "It's funny," says Jerry, "because we're all used to working with big bands where you waste hours on end in the studio having water pistol fights over millions of pounds worth of gear. When it comes to doing it yourself, every f---ing penny counts."

Despite their experience in the Inspiral Carpets and the Lotus Eaters, the music industry still lays traps for Tom and Jerry. Jerry says: "As you rise up through the music industry, the small details get taken care of for you. We see certain things going wrong now and think, 'Why did that happen? We should know about that already!'"

But then pursuing a passion is rarely easy. The Lovers play music for anyone who's ever fallen in love and fallen out again. Deliciously smooth ballads are coated with frantic guitars and dance-heavy beats. The songs push the vocals from soul to the limits of despair. New romantics, new danger.

The Lovers disbanded after about a year and Tom concentrated on solo acoustic music, touring heavily in small venues and releasing his solo album 'Keep Britain Untidy'. In 2001, Tom's album "Soul Fire" released several tracks by this incarnation of The Lovers - including 'Work Rest & Play' - alongside tracks recorded by more recent line-ups. Given that recordings spanned four years, it's perhaps surprising that the album had a consistent feel to it and holds together extremely well. Tom started playing again with a new line-up of The Lovers in 2001, including the 'Inspiral Tap' tour where the band covered many Inspiral Carpets songs. In this interview from May 2003, Tom talks about what's different about playing with the Inspirals compared to playing with the Lovers.