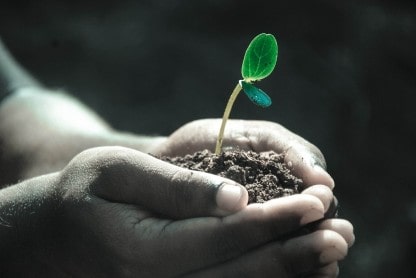 The game of Life was developed by John Conway of Cambridge University and goes back over thirty years. It's a model for a simple ecosystem, but its basic rules give rise to surprising complexity.

The world is divided into squares which can be vacant or occupied by cells. With each passing generation, some cells will survive while others die. Cells can be born in empty spaces.

A cell's destiny is governed by how many neighbours it has:

This arrangement is stable. It doesn't lead to any births or deaths:

But if we introduce just one cell inside the top right corner of the 'circular' structure, it starts changing. After two generations, it looks like this:

It evolves for about twenty generations in all before settling down to a new stable pattern with fewer cells, which looks like this:

There are many shapes that appear to crawl across the area. Here's one:

You can find more examples of gliders and stable shapes by following the links below, but you might want to discover some for yourself first.

I've created a version of Life for you to play on this website. It opens in a new window. To play, move the mouse over the play area and click to add or remove a cell. Press the 'generate' button to evolve one generation. You can add and remove cells at any time.