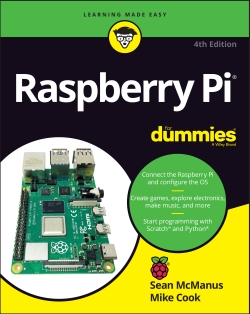 Raspberry Pi For Dummies shows you how to get the best from your Raspberry Pi, whichever model of Raspberry Pi you have. You will learn how to set it up, including connecting it up, downloading and installing its software and configuring its settings. You'll be shown how the desktop environment and the Linux command line can be used to manage your Pi and its files. You'll learn how to browse the web, use free productivity software (LibreOffice), edit images in GIMP and play music and video using the Kodi media center software.

In a series of creative projects, you'll discover how to create games in the child-friendly Scratch programming language, program in Python, code music using Sonic Pi, build a maze maker program in Minecraft, and make electronic games that are controlled by your Raspberry Pi. The book also includes inspiring projects, recommended software, and troubleshooting tips.

The book assumes no prior knowledge of electronics, Linux or similar computers, so it's perfect for beginners to computer science. We do assume, however, that you've used a Windows or Mac computer before to do things like browse the web and write letters. As you would expect, the book is written in the friendly and accessible style that has made the For Dummies series one of the most popular reference book series worldwide.

The third edition of this popular book (published September 2017) has been updated to cover the Raspberry Pi Zero and Raspberry Pi 3, Scratch 2, Python 3, Pygame Zero, and the PIXEL desktop. The Sonic Pi chapter has been updated with a new focus on improvising music. The electronics chapters have been rewritten and include an introduction to GPIO Zero, so you can get started with electronics faster.

Watch the video introduction to Raspberry Pi For Dummies

The book in brief

Download a free paper case template for your Raspberry Pi

You can download a free Raspberry Pi For Dummies paper case template to protect your Raspberry Pi. Just download the PDF and print it out, cut it out and then glue it together. It includes holes for the sockets and ports on your Raspberry Pi, and you can additionally cut into it to accommodate any GPIO connectors you're using. There are three versions of the case:

The case design was created by the For Dummies team at Wiley, based on the original template by Ian McPhee, who kindly gave us permission to do this.

Download the example files from Raspberry Pi For Dummies

You can download the example files from the book in a zip file here. You can also download the bonus chapters mentioned in the book at the publisher's website here.

The book also mentions my Amstrad CPC games, which you can use on the Raspberry Pi using the Lakka OS. They include a number of games I wrote for Amstrad Action and Amstrad Computer User magazines back in the 80s. If you're looking for a dose of retrogaming on your Raspberry Pi, give them a go!

Reviews of Raspberry Pi For Dummies

The free monthly publication The Magpi published a great review of the first edition of the book in issue 13, shown below.

Raspberry Pi For Dummies is co-written by Sean McManus and Mike Cook.

Sean McManus is also the author of Coder Academy, Cool Scratch Projects in Easy Steps, iPad for the Older and Wiser (a #1 Amazon bestselling hardware book), Web Design in Easy Steps (a #1 Amazon bestseller in web design), and Microsoft Office for the Older and Wiser. He has written for a wide range of business and technology magazines and learned to program in the 1980s on an Amstrad CPC 464.

Mike Cook is an electronics expert with a particular interest in micro controller/computer applications. He has worked as hardware team leader at Pace Micro Technology, and was technical editor of The Micro User and contributing editor to Acorn User magazines.