Michael Jackson, David Miliband and me

Most people who are into pop music have a Michael Jackson memory. Michael Jackson's "Bad" was one of the first tapes I had, and one of the albums I came back to when writing UoD. Back in 1987, I remember listening to the singles from it on the Radio 1 roadshow, while I was writing Amstrad games in the school holidays. I also remember myself and my brother being allowed to watch the then-new video for "Thriller" when a friend of my parents brought it around on a VHS.

For the music industry, the passing of Michael Jackson must have been a day of mixed emotions. As a performer, he was electric. His dancing was so distinctive that many videos showed him in silhouette. Who else can get away with that? "Thriller" is the best selling album of all time (and probably always will be), and Jackson is one of a handful of performers who are cultural icons.

On the other hand, I'm willing to bet the Jackson records are on display prominently in every record shop this weekend. For a music business that's struggling to adapt to the new online economy, the sales boost that comes with a major star's death will be seen as welcome by some. Yesterday, Jackson had the top seven bestselling albums on iTunes, and held about 10-20% of the top 100 song downloads.

It's always struck me as odd the way record sales peak after a star's death. The fans already have the records, so these sales are driven by people who just never got around to buying the albums for the last twenty years or so, and then suddenly decide they quite liked some of them when the star dies.

Social networks played a big part in spreading the news of Jackson's death, and people's reactions to it. When Princess Diana died, online social networks weren't around as we know them today. Because most of my friends shared their views on Jackson's death, through status updates in Facebook and tweets on Twitter, it felt like a shared experience. As Jackson sang, "You are not alone".

Both The Times and The Telegraph leaped upon the Twitter feed of UK foreign secretary David Miliband, in which he said: "Never has one soared so high and yet dived so low. RIP Michael." Only, it wasn't the real foreign secretary. It can be difficult to validate celebrity Twitter feeds (Valebrity attempts to fill that gap, and Twitter has started to validate some accounts itself). But a little common sense goes a long way. Some of the tweets from the fake Miliband include:

Another idea from Eyebrows, sack all the drivers and use McDonalds staff instead. He reckons Reagan would have done it. No Al!

Many of the other tweets are gently satirical, but there are enough clues there for a journalist to work out they're looking at a fake. Even with the complexity of identity today, and the way that many people will have a professional and informal persona in different places, journalists are supposed to be skilled at fact checking. It's one of the ways they can add value in a world where information is increasingly free. If they can't filter the fakers from our own government ministers, how can we trust anything else they write? 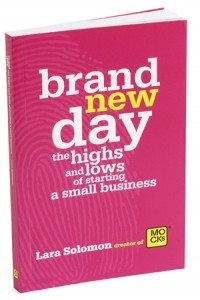 Business autobiographies are usually written by household name entrepreneurs, and marketed with the promise that you too can achieve riches beyond your wildest dreams. Most of the investors from Dragon's Den have spent some time on the bestseller lists and Richard Branson has three books to his name.

These books are often inspiring, revealing how far you can go with the right mix of entrepreneurial flair, hard work, creativity and a little luck. But they're also written by people who started their businesses decades ago, and so tend to be light on the early history. The mental gulf between a millionaire and a reader who hasn't yet made the first sale is hard to cross.

With her book Brand New Day, Lara Solomon builds a bridge. The book is her diary from 2004 to 2007, and shows how she set up a new business from scratch. By the end of the book, the company has six staff and has turned over AU$250k (£120k) in three months. The book is inspiring, in part because the steps Lara takes are small steps anybody could take, if they were comfortable with the risk and had equal drive.

The product is a mobile phone sock, available in a wide range of designs, with a different one reproduced in the corner of each page (nice touch). To be honest, it's not a product I could believe in and not one I could see myself buying. But one thing that's made Lara's business a success is that she's persevered even when others didn't share her enthusiasm, and she's created a market in the process.

Key themes throughout the book are the challenges Lara has recruiting and retaining good staff, the emphasis placed on building the Mocks brand, and the extent to which Lara has to work outside her comfort zone to get things done. The book reads like an honest account of those first entrepreneurial steps, and provides a rare insight into what goes on in a smaller business. Laroo, the company behind the Mocks, is based in Australia so there are a few cultural references I didn't get, but most of the lessons are applicable internationally.

Lara's self published the book, so if you'd like to read a sample or order a copy, head over to the Brand New Day website.

A couple of weeks ago, I went to see Jean-Michel Jarre at Wembley Arena for a show that combined the best of his back catalogue with the spirit of last year's Oxygene tour. You can read my review of Jarre's 2009 tour here.

History of the internet updated

I've updated my timeline of the history of the internet. It was originally written in 2004 and hadn't been updated since then, so I've now added in the major developments of the last five years. Incredible to think that social media sites like YouTube, Flickr, Twitter and Facebook are all less than five years old.

University of Death - now on Amazon.com

Lulu is making my novel about the music industry University of Death available on Amazon.com. This will increase the convenience of the buying experience for many readers because they won't need to register for a new Lulu account to order it.

You can find the book through my new Amazon Author page here. You can still read the reviews, download sample chapters and get your copy signed over the internet at the book's mini-site.

The ebook edition is still exclusively available through Lulu.com. I was delighted to hear from someone who's reading it on their iPhone at the moment - for avid users of iPhones and similar devices, ebooks can be the ideal format.

A novel solution to book piracy

As ebooks become a larger part of the book industry, publishers and authors could face the same challenges from piracy that record labels and musicians have over the last ten years.

A piece in the Bookseller last week said that the Publishers' Association had identified 800 illegally uploaded works and removed 90% of them using a new anti-piracy tool.

What caught my eye about the story was the suggestion that publishers might adopt similar spoofing tactics to those used by the music industry, where fake copies of a work are uploaded by the copyright owner to confuse the pirates.

The commitment that people make to a song is minimal compared to the commitment made to a book. If you're playing a song and it turns out to be a lecture about how you should be buying it instead, you could just click 'stop'. How annoying would it be if you were 200 pages in to a pirated copy of some romantic fiction novel, when a bunch of pirates swing in on ropes yelping like Tarzan and just start killing everyone? (er... in the book, obviously). I can see a lot of creative opportunities for authors who work with publishers to create spoofed versions of their works...