Reuters has made its journalism handbook available for free download and reading online, for the first time. It provides an interesting overview of how Reuters sees the role of the journalist, and includes a comprehensive guide to Reuters style.

The style guide is vital for creating a consistent style and voice across the output of Reuters' whole workforce. Consistency is important to avoid distracting the reader, and style guides highlight many of the areas where discrepancies can occur which you probably hadn't thought of before.

The guide also highlights mistakes that writers often make, but shouldn't. There's guidance there on the difference between 'advice' and 'advise', and there's an entry on 'advance planning'. You should be able to guess their views on that, but it wouldn't be in the guide if nobody ever wrote it.

I'm a bit of a style guide collector. Every editor has his own pet peeves, and it's fun to spot the stuff that's only there because it drives the editor up the wall. If you haven't written to a style guide before, adopting one will make you a better writer. It will prompt you to think about the words you use, and the ideas they convey, and it will help make your writing invisible so your message can shine through.

Other online style guides include The Guardian style guide and The Times Style Guide. Please let me know if you're aware of any others.

Social Networking for the Older and Wiser: Available for pre-order

As you might have heard, I'm burrowing deep into social networks at the moment to write about them for a new book, which will be published by Wiley early next year. The book is entitled "Social Networking for the Older and Wiser" and will provide friendly guidance on using the internet to find old friends, make new friends, and socialise online.

I'll be updating this site with more information over time, including a breakdown of the websites and tools that will be covered, a free sample and helpful resources.

The blog might go a bit quiet while I'm focusing on the book. I don't tend to write much about writing while I'm doing it (firstly, it's a distraction, and secondly I don't flatter myself that people are sufficiently interested in how I work).

If you're ultra-keen, Social Networks for the Older and Wiser is available now for pre-order on Amazon

. (Yes, they're using a slightly different title to me, but I'll have to clarify that later). Amazon's pre-order guarantee means that if the price drops at any time between your order and the publication date (even for a day), you'll only be charged the lower price. I've used it before (for the Prince O2 book/CD set) and am happy to recommend it.

If you're connected to me on any social networking sites, please excuse any weirdness that might happen to my profile as a result of testing out different features. You might occasionally see two of me. And if you think that's odd, I'll actually be both of them, having a conversation between myselves.

Just a quick post to announce a new article on this website that explains how you can show things and hide them using Javascript. People often use Javascript libraries for this purpose, but that often means using a large file full of code you don't need. The code that achieves this effect only needs to be a few lines long, as this article shows.

To see the reveal effect in action, you can try my virtual book signing tool.

Michelle Harrison: How she got published 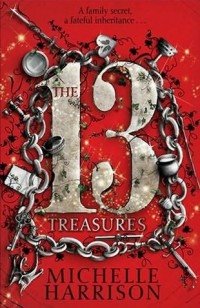 I recently attended a talk by Michelle Harrison, author of The Thirteen Treasures

, which won the Waterstone's Children's Book Prize 2009. Michelle was wearing a red top, because wearing something red is one of the ways you can protect yourself against fairies.

In The Thirteen Treasures

, a 13-year-old girl can see fairies, but they're nasty and punish her for talking (or even writing) about them. The girl (Tanya) gets the blame for the mess the fairies make, and is always in trouble with her mum. When Tanya is sent to her grandmother's house to give her mother a break from all the chaos and destruction, she comes across a girl in the woods. That girl, it transpires, was the same one who disappeared 50 years ago. How is that possible? The book unravels the mystery, and the part that the fairies play in it.

It was inspiring to hear about Michelle's journey to publication. We occasionally see stories in the press about authors who get a lucky break, but don't so often hear about those who persevere through countless rejections.

This is what Michelle's journey to publication looked like:Following the book contract, Michelle worked with the publisher on edits. In her talk, she stressed the importance of trusting the publisher, whose team will be highly experienced in creating books that sell. The reason there's no fairy on the cover of the book is that the publisher said it would put boys off from reading it.

During Michelle's journey to publication, there were many points at which she could have given up. Winning the Waterstone's prize is as much a testament to her perseverance as her imagination and talent for writing.

Chris Anderson's new book is called "Free", and is all about the history and future of giving things away in business. Contrary to some reports, it doesn't argue that everything should be free - it just looks at how giving some things away can enable you to sell some other things.

Some people have argued that authors should give away their work for free. The idea is that the reputation that builds as a result of that opens doors for consulting work, lecturing, media appearances and so on. Personally I'm not convinced by that argument: it means you have to work twice to get paid once, and it also means that your job changes from writer to consultant/lecturer/talking head, which is probably not what you really want to be. The writing just becomes marketing, rather than the focus of your creative and working life.

I can see how making things free can help to attract an audience, though, if you can afford to do so. At a time when it's hard enough to fight for people's attention, fighting for their money too is an uphill struggle.

Anderson's book is available in a couple of free formats. You can download the unabridged audiobook for free at Wired's website. The abridged audiobook will cost $7.50 from outlets including Audible. The thinking is that busy people might be prepared to pay more to save time. It's counterintuitive to charge more for less, but I do listen to a lot of audiobooks but can't ever remember getting through an unabridged one. The audio format just isn't as convenient as a real book for full-length works.

The ebook is available at Scribd, and embedded below, but you can't download or print the PDF. For more comfortable viewing, click the button in the top right of the box to view full screen. So much of the content on Scribd is there without the author's permission, so this promotion will also bring a lot of credibility to the Scribd platform.

The audio formats will remain free forever, but the ebook formats will be available for just one month. If all else fails you could always stump up for the hardback

UPDATE: The Scribd version of Free has now been withdrawn, after five weeks and 170,000 reads.

The news is out that Google is going after Microsoft by launching a rival to Windows. Google's Chrome OS has been engineered to work seamlessly with the web, and will likely integrate with Google's online email and document applications. Google is rather bravely claiming that there will be no viruses or malware. That's a dangerous strategy, because the moment there's a proof of concept virus, their credibility is shot.

The OS might turn out to be a great product. But it's hard to imagine it quickly unseating Microsoft. The switching costs are likely to be too high because people will only be able to switch to Chrome by buying new hardware. The Google brand is powerful, but can it persuade people to buy something that isn't Windows if that's all they've ever known?

There's also the problem of shifting towards online applications. If your data is all online, what happens if the service provider goes under or has an outage? I've had occasion to contact tech support for two social networks while I've been researching my book and the support was uncooperative, to say the least. They're free services and you get what you pay for.

There are a lot of commentators talking about how this is a serious challenge to Microsoft, but I'm not sure that the hype is justified. Why should Google have more success in selling operating systems than Microsoft has had in giving away web searches? How many people have dumped Google to use Bing as their main search engine?

The journalist said: "Whoever made it has really done a good job of hunting out some great content to put behind the moods."

If you've been following me on Twitter, you might have seen that I've just signed a book contract. It's a non-fiction book that will be coming out early next year and I'll have more details to share soon.

In the meantime, I'm starting a free email magazine. Once a month, I'll write a short newsletter about interesting stuff I've found online. I'm looking forward to writing some snippets about online games, music reviews and so on and I'm hoping that the newsletter can work as a publication in its own right.

It will also provide me with an opportunity to tell people about my books when they come out, and hopefully to help start word of mouth around them where appropriate. The email newsletter will also enable me to keep in touch with people who don't visit this website regularly or don't subscribe to the RSS feeds or Twitter feed, but the focus will very much be on adding value. I want this to be a publication that people enjoy receiving and reading.

If you'd like to subscribe (thank you!), there's a form on the right hand side of this page right now. Just enter your name and email address, and (optionally) let me know what content you're most interested in on this site. When you click the button, you'll be sent an email with a link in it. You need to click that link to confirm your subscription, to make sure that people don't sign others up.

If you previously subscribed to one of my mailing lists, I'll drop you a line, but please do sign up using the form if you've got a couple of seconds. It'll save me a lot of time! Thank you!