Hands on with the Korg DS-10

I was excited when I heard about Korg developing a synthesiser program for the Nintendo DS, but yesterday I got a chance to see and hear it in action at the London International Music Show. I can confirm it's very cool. It wasn't officially on display on the Korg stand, but a gentleman called Tatsuki was kind enough to demonstrate his own pre-production copy of it, which looked like it had been burned onto a generic homebrew card.

There have been other instruments created for the DS before, but this is arguably the first that has been designed to work for solo performance (unlike Jam Sessions). You can create loops (including basic drum loops), and sequence different patterns to build up more complex pieces of music. Most importantly, you can save your creations to the card. Using wi-fi, you can apparently play with up to eight others and share sounds, although my understanding was that they would need to have their own cards too.

The sound was extremely high quality. It was being amplified through decent speakers at the show, but it sounded crystal clear and much like I'd expect an original MS-10 from 1978 to sound. Not that I have a great idea of what that's supposed to sound like, but I mean that it sounded like an instrument and not like a toy.

The synth appears to use the interface well. When you patch the effects, for example, you touch one socket and drag a cable to another socket to patch them together. The touchpad can be used as a Kaoss pad emulator, which bends the sounds playing according to how you stroke the touchpad, and adds a bit more of a human touch.

Here's my photo from the show: 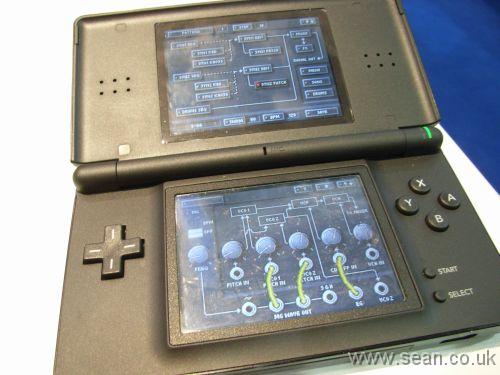 It's due for launch towards the end of July, but won't be getting a UK launch unfortunately. So I guess I'll have to import it.

If you want to know what it sounds like, check out the sample song on the official website. There were bits in there that sounded like parts of Oxygene.

Speaking of which, the show took place at Excel in Docklands, built on the site where Jean-Michel Jarre held his Docklands concert in 1988. I hadn't been back there in twenty years, and it was strangely moving to see the Millennium Mills building still standing proud on the other side of the docks. 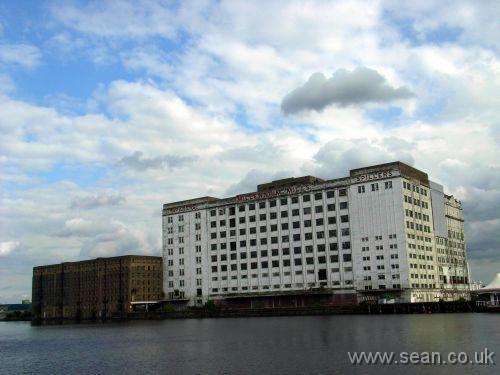 
This is a poster that was in the gents' toilet at a plush hotel where I was a wedding guest recently. I thought it was a great piece of copy, so I took a photo of it. 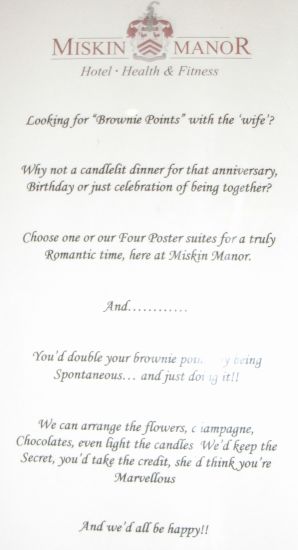 I think what impressed me was the way it addressed its audience directly (men), its economy with words (less than 80), and its subtle call to action (be spontaneous and book now!). The cheeky tone worked well where it was, and the fact it was just printed on hotel stationery made it seem more personal as well. It wouldn't have been nearly as effective if it had been printed on glossy paper by a central marketing division. I should add that this was positioned by the exit, rather than around the urinals where adverts always seem tacky.

I've created a virtual book signing program and posted it on this website. Because copies of 'University of Death' go straight from the factory to readers, the only way that readers could get their copy signed was if they met me and happened to be carrying their copy of the book at the time.

Now, thanks to the magic of the internet, you can get your book signed and dedicated online, using an authentic handwriting font.

Because this requires font embedding, this feature is only compatible with Microsoft Internet Explorer.

The website's been fixed. What next?

If you're a regular here, you might have noticed I've redesigned the website. With today's wider screens, the content was becoming difficult to read on larger screens and the layout was getting messy. Having fixed column widths should make it more readable. I've also taken the opportunity to create a handheld stylesheet, tailored for the Nintendo DS, so that the whole site should work on the DS browser now, as well as on other devices that use the handheld stylesheet. I've created a web clip icon for the iPhone and iPod Touch too, and I've weeded out some dud links and images and generally had a spring clean. I found some strange differences between IE and Firefox when updating my Javascript games, but it all seems to be working fine now. Let me know if you spot anything that still needs attention. It's been time consuming, but now that's done, I can start thinking about content again.

There's a couple of articles I've already promised, and a couple more I've been wanting to write for a while. When I get some time, I've got plenty of ideas for things to write in my notebook.

I hesitate to say this, but I'm also batting around an idea for another novel. I'm not sure I have the energy to devote to writing a book at the moment, although it's tempting to try blitzing it Nanowrimo-style, to see how much I can write in a month. The idea concerns another facet of popular culture (not the music industry this time), and would have a different tone to University of Death.

It's not the first idea I've had since finishing UoD. I had one idea that I can now see was rubbish, although it was briefly exciting. But this new idea is gnawing at me. It's got to the stage where I'm dreaming about bits of it, so I might just try a little writing experiment soon to see if it goes anywhere.