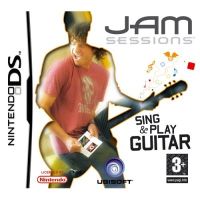 A few years back, it seemed computer games were the new 'rock and roll'. Now, it seems rock and roll is the new 'computer games'. With Guitar Hero 3 in development, and axe meister Slash booked to write music for it, it seems everyone wants to play at rock god where once they played at spaceman and soldier.

Jam Sessions for the Nintendo DS is the latest music-led game. 'Sing and Play Guitar' it screams from the cover, with the promise of 35 songs on the back. That turns out to be stretching things a bit, because all that's included from those songs are the lyrics and chords. There's no backing track or melody line, so you're basically strumming by yourself like some lonely indie kid in his bedsit. The song collection seems compiled to hit every demographic once (Eros Ramazotti?), which means you're unlikely to know a lot of these songs unless you have pretty eclectic tastes. And if you don't know the song, it's impossible to guess the timing or melody, so you don't get very much out of their inclusion. It's not like Guitar Hero where you can start off never having heard of some heavy metal number, and finish up loving it.

But if you think of Jam Sessions as an instrument, it's much more promising. The guitar samples sound realistic and there are a number of effects so you can make them sound all spacey or grungey if you don't fancy a clean acoustic strum.

The controls work like this: You hold down a direction button to select a chord from your palette. You then strum the stylus across the virtual string to make it ring. The upstroke and downstroke sound different. With eight chords assigned to the directional pad (diagonals are included), and the left shoulder button used to switch in another palette, you can have up to 16 chords available during one jam session. 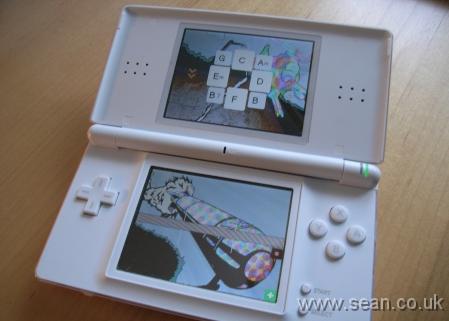 I spent a happy half an hour strumming away and playing with the effects and if you're a bit musical, you'll probably enjoy it too. It certainly makes it easier to play some of the finger-mangling chords in my Prince music books.

You can record your performance, although each recording slot is fairly small. It's counted in strokes, but unless you're playing a real dirge, you're only going to get about 30 seconds out of each slot. You'll do better using a line out and recording it on your PC.

The controls can be fiddly. I found the diagonals difficult, because if you slip there's a good chance you'll trigger a wrong chord. For most songs, you'll be able to assign the chords you need to the up/down/left/right buttons (plus the same buttons in the additional palette). You can save your palette combinations.

There are over 100 chords available, which is plenty for most people. The variations appear to be major, minor, major 7, sus4, add9, minor 7, minor7 flat 5 and diminished. Jam Sessions really missed an opportunity here: if it were possible to configure your own chords (even just a handful of them), it would make it possible to play just about anything. As it is, it can be irritating to find that you can't play a particular song because one tricky chord's missing, or because you can't do any inversions or chords with bass notes, and it's a song where you really notice the difference.

There are a few other missed opportunities: the most obvious is the lack of support for looping and layered playback. There are plenty of themes included, although it might have been nice to be able to doodle your own customisations. It would have been interesting to have a wider range of samples too, rather than sticking with the guitar. A simple drum machine would have added quite a bit too, as would the ability to play pure notes rather than just chords. But perhaps the interface is fairly basic because the cartridge is already taken up by the existing samples, which do sound great.

Jam Sessions is a fun piece of software, and as long as you're happy to consider it an instrument rather than a game, you'll enjoy it. There's an amplifier available separately, if you really want to crank it up. I'm not convinced Jam Sessions is what non-musicians need for their first introduction to performance, but I do think it's a handy tool/toy for people who already know a bit about chords. Of course, you can't beat thrashing away on a real guitar (the DS isn't as responsive if you're really hammering it quickly, for a start), but this is a good and cheap way to experiment with guitar sounds and effects. Perhaps I'll use it on my first album, one day...

It looks a bit disappointing in that there's what feels to me like quite a narrow field of people who know enough about chords to use this, but not enough to at least try it on the guitar.

I guess it could be a useful learning aid for the beginner guitarist, who could use it to compare what they play on a guitar with how it's meant to sound.

My friend Jim has that Marshall amp and uses it with his real guitar when he goes anywhere he doesn't want to carry a real amp. It sounds pretty good.