Amazon's launch of an ebook reader is a smart strategic move: beat the competition by becoming the competition. The company sells most things nowadays, but built its fortune on book retailing and has since used its technology expertise to branch into search engines, distributed processing and micropayments. The company has already built relationships with publishers and has an archive of scanned material, which presumably is ready to publish digitally the moment the copyright holder gives the nod. If anyone can make a go of the ebook, then Amazon can. Kindle reportedly sold out at launch, which shows there are enough gadget freaks to sustain this kind of thing.

People compare Kindle to the iPod. We never knew we'd want to carry all our music everywhere until we could, goes the logic. I have dozens of half-read books around me right now, but I'm not convinced I need to carry them everywhere. The reason they're half-read is that I can't usually be bothered to read them. I read my better books instead. There's a big difference between a song, which you consume in about three minutes, and a book, which you consume in about three weeks. What made the iPod popular was that it was backwards compatible with CDs (and arguably with pirated material). Filling an iPod would cost an absolute fortune if you had to buy all the content again, but that's what you'll have to do with Kindle.

Kindle could emulate the iPod by creating a market for digital content, though. Nobody was fussed about buying digital music (although the options were there) until the iPod made the ownership experience so smooth. Kindle should make it much easier to buy digital content - easier than buying printed content, even. It will also establish a going rate for an ebook. At the moment, non-fiction ebooks are sold on the value of the information, independent of the number of pages. That could all change once Kindle's knocking out virtual paperbacks for a similar price to their paper equivalents. For some authors, Kindle is a threat.

Apparently, Kindle will enable you to subscribe to magazines and newspapers. It's hard to square that with today's information economy, where newspapers are cheap if not free and heavily subsidised by advertising. You don't mind if there's an A5 advert on a page of the Guardian, but you'll certainly mind if there's a (smaller) full screen ad on your Kindle screen. I don't believe people will tolerate advertising on content they've paid for on an ebook reader. For the publishers, Kindle sales are probably a revenue stream that works as marginal income but stops working if everyone reads the digital version instead of the print version. At that point, they can't sell ads any more.

Are we ready to give up the humble paperback? My friend John has written a great analysis of how Kindle's ebooks differ from how we like to use real books. As John writes, you can't lend, give, borrow or sell Kindle ebooks. There are a couple of other things I like to do with books which John hasn't mentioned, including annotating them, cutting them up and scrapbooking excerpts, and reading more than one page at once by flicking between the pages (more for IT and reference books than fiction).

There are more philosophical issues as well: do we really want the printed word to be governed by digital rights management (DRM)? The British Library has already expressed concern about DRM being used to restrict the use of creative works after their copyright protection has expired. Are we sure it's the right thing to do to replace the printed word (which has never been cheaper) with a device that costs two hundred pounds? What legacy will we leave in fifty years' time, when all the Kindles are conked out and nobody can unlock the files any more? Of course, it's not the beginning of the end. Books won't die out any more than speech will, and even if they were going to, we couldn't do much about it without undermining the whole basis of the market economy.

This could be the finest ebook reader that's been released. The wireless buying mechanism is particularly good. But I'd still rather read a real book, for which nobody will mug me on the tube and I won't care too much if it falls in the bath or gets lost/stolen on the beach.

Anything that encourages more people to read and buy books must be a good thing, although I suspect it will just be the same people using a different channel. If Kindle succeeds it will put Amazon in a similar position in the books market to that which Apple has attained in the music market. Amazon already negotiates hard with authors (who are expected to provide wholesale discounts on retail quantities) and publishers. Since there's no backwards compatibility with print books, Amazon does need authors a lot more than Apple needed record labels, though. Maybe we'll see a softening of Amazon's attitude towards content creators following its heavy investment in the Kindle technology and e-commerce infrastructure.

Can I tell you about my new kettle?


I hear about new technology at work every day, but the most impressive gadget I've seen lately is a kettle. But no ordinary kettle: it has a thermal layer, so it can keep the water hot for up to three hours. Boil the kettle, make a cup of tea and come back later on for more tea and the water is still hot! Amazing! You don't have to wait for it to boil again, or waste energy reheating.

As a man who rarely writes without a cup of camomile tea by my side, you can imagine how this has changed my life.

How did it take until 2007 for someone to market a kettle like that? It seems such an obvious idea now we know about it.

Sorry. Did that just happen? Did I just blog about a kettle?

When marketers get lazy

Two marketing execs, in horn-rimmed glasses, sit around a glass table. "Okay, so cooking oil. What can we do for this campaign?"

"How about... There's a puddle of cooking oil, and it starts to coalesce, like in Terminator, and becomes a Morph-like character, who dives into a chip pan and starts to dance with the chips! We play salsa music, and then display the name of the brand."

"Well, we'd need about two weeks of rendering, and probably a month of time from a lead animator. That won't be cheap. And there's the broadcast time too, of course. But the campaign extends smoothly across all media."

"Hardly cheap as chips, though."

The man sighed. It was nearly home time. "I guess we could do what we always do, then."

"Yes! Our market research suggests that our customer base is largely female, so they're bound to relate to that. What about a tag line?"

"How about 'Sizzling!'. Or 'Hot stuff!'. No, wait. Let's just put 'Cooking!'. Get back to the basics of the message we want to communicate here."

"Like it! And she's writhing in the cooking oil?"

"No, she's a stock photo. She's never been anywhere near it."

"She does have absurdly large breasts, Sir, and a rather small bra to keep them in." 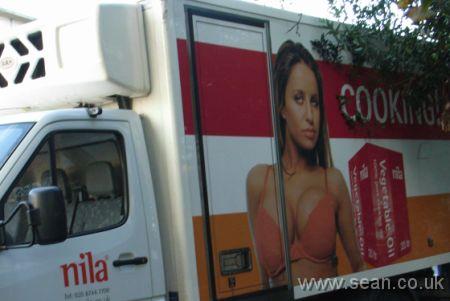 As seen in Chiswick about twice a week. Excuse the poor photo, but some bloke was unloading drums of oil from the back of it, so I had to be discreet. For the avoidance of any doubt, this photograph was taken in 2007, and not 1977 as you might otherwise assume.

The shops have been full of crackers and Christmas puddings since August, but now normal people are starting to make plans for Christmas too. You can add my free Javascript advent calendar to your website, and provide a different surprise each day. If you're in a band, you could put a different song behind each door. If you're a photographer, a different photo. Businesses could put an 'offer of the day' behind the door. Anything you can link to on the web (or code in HTML) can go behind one of the doors. The advent calendar has full installation instructions and includes rudimentary controls to help prevent people cheating and opening doors early.

I won't be configuring an advent calendar for my site this year, so let me know if you do!

Prince: taking on the fans 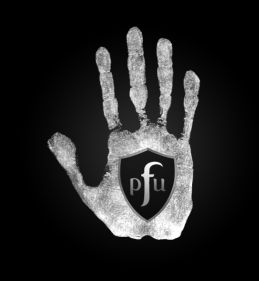 Prince is a genius, officially the second greatest mind working in rock and pop music (after Brian Eno), according to Creators Synectics, a global consultants firm. I've been a fan since 1989 and firmly believe he's our greatest living musician.

But what will he achieve by telling fan sites they can't use his photo any more? He probably doesn't even own the copyright to the photos (which will belong to the photographers, unless stipulated otherwise by contract, which it certainly won't have been in the case of fan photos). Surely it's taking the mickey to say they can't use images of album covers, given the sites exist purely to talk about his work? Demanding compensation from these sites, which are run by volunteers out of love for the man and his work, is ridiculous.

Following the media coverage, I hope he will focus his lawyers on genuine copyright infringements, rather than on legitimate use of materials for commentary and review. An artist like Prince, who has been more outspoken than most in his 30 year career, should appreciate the importance of free speech and support it. Copyright laws were not created to suppress commentary and should not be abused to do so.

You can show your support for the fansites at Prince Fans United.