A student who wrote a short story including scant details of a fictional murder is being pestered by US police to provide DNA so that they can eliminate him from their real-world murder enquiries, according to Boingboing.

The story entitled 'I am Ready to Serve My Country' by Philip Sandifer is written as an application to join the defence forces and is under 250 words. In the story, the letter's author boasts that he's killed before, hinting that he believes this makes him suitable for the armed forces. It's a subtle joke, obviously lost on the University of Florida police. A university spokesman said that murder's a touchy subject because five students were killed off-campus ten years ago.

All societies censor their culture to a greater or lesser extent, but this witty story is extremely mild compared to what you'll see if you switch on TV any evening, or watch a blockbuster at the cinema. It is encouraging to see that the student has the full support of his advisor, Professor Dobrin, but disturbing to see the police trying to intimidate people out of expressing their views and creativity. This is nothing more than an abuse of power to limit free speech. 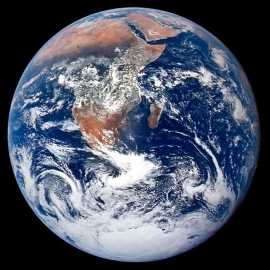 Image courtesy NASA Johnson Space Center. Used by permission.
Only 24 people have ever left Earth orbit to see this sight with the naked eye. It's easy to overlook the significance of this: this is, after all, the most reproduced photograph in the world and from satellite photography we're all familiar with how the Earth looks from afar. But just imagine for a moment that you're so far away from home that you could see the whole planet at once. And that you are most likely one of only three living things that are not on that planet. And that you're bobbing and weaving through space in a tiny capsule with water and air to keep you alive in a hostile void that stretches eternally in every direction.

This photograph was taken on Apollo 17, the last of a series of missions that landed man on the moon. Nowadays our space missions don't even leave low Earth orbit. It seems unlikely we would be able to repeat the feat of visiting our nearest planetary neighbour today. The cost of the moon landings has been estimated at US$135 billion in 2005 terms and taxpayers are unlikely to bankroll such an expense today. We're also much more risk-averse than we were back then. 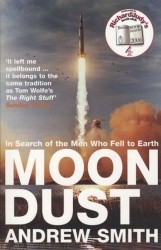 Of the 12 men who have been to the moon, only nine are still alive and they're all old. In his book 'Moondust', Andrew Smith sets out to meet the surviving moon walkers, aware that there will soon come a time when there are none left. He learns how they ate spaghetti, played golf, smuggled stamps and scratched initials on the moon. He learns how they thought their odds of returning alive were at best evens. And he tries to uncover how it feels to be part of such a lonely club - one of only 12 to have had the most out-of-this-world experience, and completely unable to answer a whole species' demands to know what it feels like.

To some extent, the book is a travelogue, talking about all the people Smith met and building up a picture of what the moon landings meant then, and what they mean today. He also writes about his own memories as a child of the landings on TV, and recreates the atmosphere and wonder of the time. Nobody knew for sure if there was life on the moon. Some thought the astronauts would return with a deadly disease that would wipe us all out. David Bowie was singing about being lost in space at a time when Apollo 11 was landing on the moon. At the height of the cold war, America put a man on the moon to beat the Russians but declared it a mission 'in peace for all mankind'.

The astronauts have doubtless been called upon daily to re-tell their stories in different places and much of the information in this book is available out there in some form. In his book, Andrew Smith re-assesses Apollo and asks whether it was worth it, hinting at what we might be losing over the next few years as our moon landers die out. As well as the impact on 'all mankind', he looks at the effect of the mission on the astronauts and their families and how the space programme treated its pioneers. There was no counselling available for astronauts after their return to help them answer the question 'what next?' and they were on a basic military wage, leaving many of them trying to carve out new careers after Apollo with mixed success.

By the time I was born, Apollo was over. The moon landings were history, and felt as remote and distant as World War II. I remember seeing the first shuttle launch on TV at school, but don't remember ever being taught about the moon landings. This book opened my eyes to what the NASA team achieved in three short years between 1969 and 1972 and the heroism of those who put their lives on the line to travel so far. It's funny to think that the whole thing came about as a result of a giant bet between the leaders of two superpowers, with little to show for it apart from a few photos, a few kilos of rock and a new sense of our place in the universe. But perhaps that alone is worth the trip. Neil Armstrong stood on the moon and found he could blot out the earth by holding his thumb up. "Did that make you feel big?" somebody asked him. "No," he replied. "Very small."

Photos: The Sultan's Elephant in London

Yesterday I spent much of the day chasing a 40 foot mechanical elephant around central London with my camera. The Sultan's Elephant is performance art taking part in London over four days. If you're reading this today (Sunday) and can get to London, make sure you go and see it (schedule here). If you can see the puppets on the move, it's fantastic. The elephant was accompanied by a live band as well, so there was quite a carnival atmosphere as people followed it through the streets.

If not - or even if you did - check out my photos of The Sultan's Elephant sightseeing in London.

How to record/rip records for iPods and MP3 players

Since I got a record player at Christmas, I've been tinkering with getting music on vinyl into a computer. I enjoy the gleam of the light across a mint 12" and the act of getting up and putting a new song on, having carefully chosen what would sound best next. But sometimes, it's nice to be able to play a track - perhaps even an otherwise unreleased b-side - on-demand in a single click. Perhaps most importantly, once these golden oldies are digitised, I can back them up and be sure that they won't degrade any further in quality.

My record player has a built-in pre-amp, so I can connect its output directly into the line-in on my PC. Initially I used a program called RIP Vinyl (see what they did there? Clever!). That worked well for pop music, but the volume settings for the line-in on my sound card appeared to be either extremely high or off. I couldn't get any sensible balance, which meant that noisy records suffered from clipping. It sounded like all the instruments were gargling with mouthwash at irregular intervals. But not, I hasten to add, in a good way.

I found I could get more control using the Sound Recorder program that comes free in Windows. Firstly, it worked with the second line-in socket my computer has (don't know why it has two, but it was free, so let's not question it). RIP Vinyl only coped with the one on the sound card. Secondly, it didn't suffer from any of the clipping.

Here's how to use Windows Sound Recorder to record vinyl:
There is more sohisticated software available for ripping vinyl. There's even software dedicated to cleaning up the pops and crackles. But this is a proven and quick way to get vinyl recorded into your PC with the minimum of fuss and hassle.