The true value of art 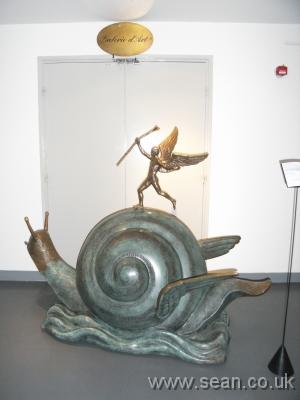 This sculpture of a snail by Salvador Dali is an extremely limited edition, worth hundreds of thousands of pounds. Most of the time, it is shown in the hallway of the museum, with a small plaque on the wall above it.

When the gallery owner goes to lunch, it's used to block the shop doors.

Even more often than the line 'I should be so lucky', you're going to hear one thing repeated over and over if you go to this show: 'Oooh, in't she tiny?'. She is. Tiny.

In this exhibition at London's V&A Museum, you can get up close with Kylie Minogue's best-known costumes from stage and TV. To provide context, there are a couple of giant screens showing the single videos and live footage. 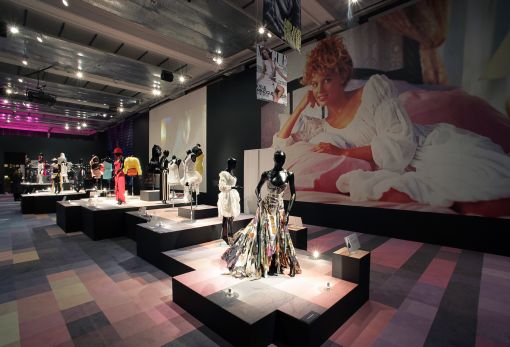 But the best costumes, you'll recognise immediately. There's the flimsy hooded costume from 'Can't get you out of my head', which must surely require sticky tape to avoid a wardrobe malfunction. There's the vampish yellow fluffy top and shorts worn in the 'Confide in Me' video and the silver spacegirl get-up from the recent tours. And to kick it all off, we have the virginal white dress she wore in 'I should be so lucky'.

One of the highlights is the recreation of Kylie's dressing room. You can see the dentists' chair she applies her make-up in, the marked-up photo pinned to the mirror to guide her, and the teddies given to her by fans. Although it's staged, there's fascinating detail. 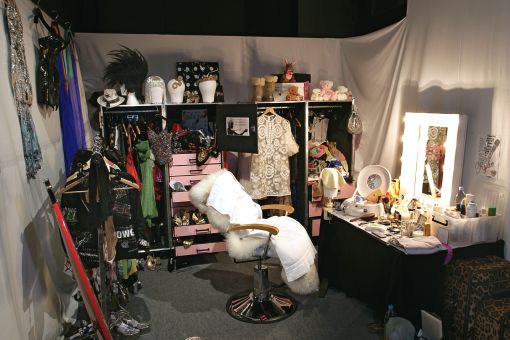 There are some fantastic photos as well. At a time when most artwork is published no larger than 5x5 inches, it's good to see shots from Light Years and other sessions blown up large. If you enjoy photography, that bit alone is worth dropping in for. Kylie's record releases are collected and mounted too, which is perhaps the best illustration of how she has toyed with her image over time.

Some of the show is just memorabilia: the jumpsuit she wore as Charlene in Neighbours doesn't say anything about fashion or style. The gold hotpants from a car boot sale are only there because Kylie's been in them. The various trophies and gold disks assert her credibility as an A-lister, but don't add much else.

There's been a lot of chin-stroking in the press about whether a national institution should be 'dumbing down' by displaying a pop star's wardrobe. Private Eye published a spoof advert inviting you to see Kylie's pants at the "T&A... surely V&A? - Ed". In many cases journalists have focused on the infamous hot pants, which says more about the hacks than the curators and visiting public. This show's a good match for the V&A's fashion collections, and it's no bad thing if more of the taxpayers who underwrite the museum are attracted through its doors.

It's not a massive exhibition: three rooms of costumes, a small room playing a video and the dressing room. But you can spend a fascinating hour there, and there aren't many other pop stars with the style to pull off a show like this.

The exhibition runs until 10 June 2007. Pre-booking strongly recommended. Tickets are free, but there is a £2 fee for booking online. Feel free to leave your comments below.

Brian Eno's latest project is a DVD-based software package that layers and combines hand-made slides to generate 77 Million Paintings. Accompanied by a generative music soundtrack, the package creates ambient art that is unique each time it is run. Read the full review of '77 Million Paintings' by Brian Eno. It includes screengrabs of nine of my favourite virtual paintings.

Electroplankton: singing with the fishes

Electroplankton (and at Amazon.co.uk) is the first software I've seen on the Nintendo DS that has impressed me. It's basically a pocket toolkit for creating generative music, divided into ten sections. There's one where you draw lines across the screen and fishes swim along them. As they do, they make a sound which changes in pitch according to how the line is drawn across the screen. There's another section where four fishes swim across the screen and you can record a different sample for each and they're all looped together. The most engrossing module is one where you have fishes bouncing between nodes on a grid. Each node represents a different note and has a pointer to another node, which you can turn to make the fishes go to a different node next. As the fishes bounce around the nodes at different speeds, they make layered music that reminds me of some of Brian Eno's work. In another module, you press different boxes on the screen to play notes. Each melody is looped four times, so you can build up layered pieces that change over time. It's all good fun, and the most accessible way to dabble with generative music.

Some of the levels are little more than toys, but others are sophisticated enough that you could consider them to be instruments. This poses some interesting questions: if I write music using Electroplankton, who owns the rights? The manual (PDF, 6MB) doesn't say, but does invite you to perform using Electroplankton without asking for any money for the privilege. Clearly the designer Toshio Iwai has invested time and creativity in making the level designs, algorithms and sounds that make my music possible. But without my creative input, the music would be random. Electroplankton does feature a computer-plays mode, so perhaps Nintendo would argue that my creative input is unnecessary? In which case, are we all just wasting our time?

We could go around the houses on this for ages, but it does seem amiss of Nintendo not to clarify the issue up-front. Still, if we are all wasting our time, there are worse ways to do that than listening to ambient music while watching cartoon fishes with big grins dancing.

Photos: The Sultan's Elephant in London

Yesterday I spent much of the day chasing a 40 foot mechanical elephant around central London with my camera. The Sultan's Elephant is performance art taking part in London over four days. If you're reading this today (Sunday) and can get to London, make sure you go and see it (schedule here). If you can see the puppets on the move, it's fantastic. The elephant was accompanied by a live band as well, so there was quite a carnival atmosphere as people followed it through the streets.

If not - or even if you did - check out my photos of The Sultan's Elephant sightseeing in London.