I'm a great fan of Ben Elton. His book 'This Other Eden' is one of my favourite fiction books of all time, although it obviously became a bestseller on the strength of his name rather than the accessibility of its story about eco-armageddon. So it's with a mixture of grudging admiration and disappointment that I read 'Dead Famous': Admiration because it's written to a perfect blockbuster formula - if you want a masterclass in producing a bestseller, there are worse places to start; but disappointment because his earlier books show he's capable of more ambitious writing and of creating more imaginative stories.

The book is about a murder committed inside the Big Brother house, neatly fictionalised for this book. It's satire rather than comedy, so don't expect to chuckle much. The time zones jump around, and Elton's desire to withold the name of the victim for the first third of the book makes for some contrived writing. At times it feels padded. But it's a page-turner, easy to read, with some spot-on descriptions of the ghastly characters you see on shows like Big Brother. You get the feeling Elton churned this out pretty quickly, but as long as you read it pretty quickly too you'll be entertained if not impressed.

I've uploaded a selection of my unpublished photographs of Kenickie, one of my favourite bands. It's the first stage in the renovation of my rock and pop photography gallery, which will see it expanded with more pictures and made much easier to use.

Other news in brief: The Customer Service Pocketbook has been published in Arabic. 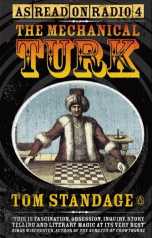 You might have heard of Amazon's Mechanical Turk. It's a web service that enables you to integrate human tasks with your software. So you might have a program that needs to know which of ten pictures is in focus, for example. You would write your program to feed that judgement task to Amazon's Mechanical Turk. Amazon then gets people to perform that task, pays them, and takes a commission on the payment from you. The data is returned to your software as if the task had been performed automatically. A neat idea, and it remains to be seen how it's used. So far, it's mainly Amazon using it for identifying photos of businesses for its own A9 search engine. It could be exploited by spammers to get around the intelligence tests used to prevent automated data entry (including tests such as working out the jumbled letters in an image). But it's not hard for Amazon to monitor at the moment, so this is unlikely to be a problem any time soon.

Why is it called a Mechanical Turk? It's a reference to an automaton invented in the late 1700s to play chess. At the time, mechanised artworks were popular inventions. They might play instruments or animated landscape scenes. Wolfgang von Kempelen was a member of Empress Maria Theresa's court in Vienna. When he was challenged to produce an automaton better than any seen before, he created a machine capable of playing chess. Dressed as a Turk, the machine went on to play against - and mostly beat - members of the public. The Turk moved its own pieces and corrected an opponent's illegal moves. Kempelen proudly exhibited the cogs inside the cabinet at the start of the game, showing how the box was empty except for clockwork devices. For a long time, nobody came up with a conclusive explanation of how mechanics alone could simulate such intelligence.

In his book 'The Mechanical Turk', Tom Standage uses many contemporary accounts of the Turk to tell its story. He pieces together the machine's complete history, and ultimately reveals how the illusion was most likely created. It's not giving too much away to tell you that human intelligence was involved and it wasn't fully automated. That's why Amazon stole the device's name for its own service, where a fairly convoluted technical arrangement creates the appearance of machine intelligence.

At times the exhaustive research gets repetitive: reading accounts of the same event from different perspectives can be tiring. But these moments are few and far between. It's accessibly written, shows proper research and tells a story that's likely to delight anyone with an appreciation of illusion and/or technology.

I often read about software that performs such sophisticated functions that I question whether human intelligence is really being used. The developers of such applications are - like Kempelen - often unwilling to discuss how their product works even in the vaguest of terms. Given how cheap educated labour is on the global market, it wouldn't surprise me to discover that some enterprise-scale software applications that simulate human judgement owe more to the Turk than they're letting on. For the so-called developers of such software, this book would make an ideal gift.

With thanks to Patroclus for the recommendation and loan of the book.