Garfield Minus Garfield: The book

You might already have heard of Garfield Minus Garfield, a cartoon strip created by Dan Walsh by editing Garfield out of the original cartoon strips. You're left with Jon, a lonely man who appears to be slowly cracking up. The empty frames create a sense of time crawling along.

Creative projects like that are risky - it's not uncommon for the original artists and writers to stamp out unauthorised derivative works. Jim Davis, though, has been supportive. He told The Washington Post (and much kudos to Walsh for getting his site covered there) that the site was "an inspired thing to do" and he wanted to thank Walsh for "enabling him to see another side of Garfield".

Now, there's going to be a book that puts the original Garfield strips alongside Walsh's edited strips. This seems like a great way for Davis to celebrate Garfield's 30th birthday, and it's a nice model for how cartoon strip writers can involve readers and package user generated content commercially.

I'm curious about how Walsh's creative input is being recognised - I doubt he's getting a half share as co-author, but I hope that his creativity is being compensated fairly. Particularly since a lot of people who have never bought a Garfield book might be inspired to do so because of the 'Minus Garfield' juxtaposition.

Scott Adams has mashups on his Dilbert site, which enable readers to replace his final frame with their own punchlines. Visitors can vote on which jokes they like best. This could make for a great book too, although the main value is the way that it involves the readers with the work and inspires them to visit Adams' site every day.

I have heard a conspiracy theory that the Fred Bassett cartoons are all missing a final frame which contains the punchline, which is why they're mostly unfunny. Perhaps that could be the next candidate for a writer-reader mashup?

Book review: 'As Used on the Famous Nelson Mandela' by Mark Thomas 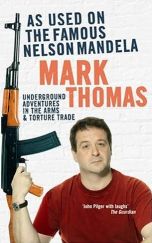 What better way to expose the laxity of UK arms controls than for a bunch of schoolchildren to set themselves up as arms dealers? Without breaking the law, Mark Thomas and his team of students were able to trade weapons and torture instruments internationally. His book 'As used on the famous Nelson Mandela' is a damning expose of an industry worth about $1,900 million in exports to the UK - an industry that thrives on death and misery and is often subsidised by the tax payer. The villain in this story is British Aerospace, which Thomas concludes has exerted inappropriate influence on UK foreign policy.

The tone of the book is well-measured: Thomas is able to hint at the dark side of the arms trade without setting up any voyeuristic sideshows. His approach is inherently comic, involving at times ridiculous stunts, but his talent for the one-liner (honed through years on the stand-up circuit) makes the heavy stuff engaging too. There's proper research behind this book and Thomas is both informed and well connected as an activist.

This book is an entertaining and thought-provoking read. If you've enjoyed Mark Thomas's live shows you'll hear his voice clearly as you turn the pages. If you're not familiar with his live work, start with his double CD recorded 'The night [Blair's Iraq] war broke out'. It's a perfect example of how to take a subject seriously while being imaginative and humourous in its presentation - a rare talent.

The idea of Ben Elton writing a book about Friends Reunited sounds like cash-in bandwagon-jumping of the worst kind. I thought it would be better if he wrote a book about one of the parody sites that people kept launching a few years back, such as Bullies Reunited.

So imagine my surprise to find out that's exactly what he's done. In his murder mystery 'Past Mortem', Elton explores the theme of bullying and the impact it has on everybody's lives: the bullies, the victims and the witnesses.

Detective Edward Newsom is tracking a serial killer while battling loneliness by delving into his own past through Friends Reunited. He's surprised to find his status has changed since he was at school, and then shocked as his past and present collide.

There are a couple of weaknesses. The main characters are well-written, but some of the characters on the periphery are see-through. Even if former class mates of the eighties did meet up, it's highly unlikely they would still be saying 'Rock on, Tommy!' to each other. Even in jest. The love story sub-plot is layered on pretty thick and only delivers a modest pay-off. While there are surprises throughout, the ending seemed obvious from about two-thirds of the way through.

But that's just picking on a good book. 'Past Mortem' elaborates on its theme creatively and brings everything to a tidy conclusion in a way that's so elegant it's like watching synchronised swimming. At times, it's gruesome. But it's satisfying to read and unlike Dead Famous, avoids easy answers and nearly all cliches. This is a great whodunnit, with a nice line in whydunnit thrown in for free. Recommended.

Book review: A piano in the Pyrenees by Tony Hawks 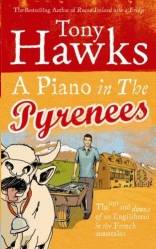 After lugging a fridge around Ireland, chasing Moldovan footballers to challenge them to play tennis, and increasingly desperate attempts to have a hit single, life's slowed down a bit for Tony Hawks. His latest book 'A Piano in the Pyrenees' tells the story of how he bought a nice holiday home in France, moved a piano over there and chilled out with his friends.

He still has a flair for character sketches and for humorous writing. It's just that the material's a bit weak. There is a 15 page section about a village event where everyone follows the cows up into the mountains. It's a gruelling journey and a long day, but it all falls a bit flat when Hawks ducks out early and ends up committing a minor faux pas in front of the mayor: not really the kind of punchline you'd expect after such a big build-up.

Most of the book's pretty hum-drum: Buying houses abroad, wrangling with foreign bureaucracy, moving house, and building a swimming pool are common enough experiences that you'd never get an autobiography commissioned on the back of them. Reading the book is a gentle and pleasant enough journey - it just doesn't feel structured or particularly special at the end. Put it this way: you or I could never get this book commissioned on its outline, and probably not on the strength of any of these chapters either.

If you've lived in the region he writes about, it might be a lot funnier for you. If you enjoyed his other books, you'll probably like reading his style again. For me, it was an enjoyable but lazy read. After all his previous madcap stunts, I was pleased to read a book in which he seems to be content, rather than just jolly. But I'd be surprised if the market will be as tolerant and it seems unlikely this book will recapture the commercial success of his debut.

I'm a great fan of Ben Elton. His book 'This Other Eden' is one of my favourite fiction books of all time, although it obviously became a bestseller on the strength of his name rather than the accessibility of its story about eco-armageddon. So it's with a mixture of grudging admiration and disappointment that I read 'Dead Famous': Admiration because it's written to a perfect blockbuster formula - if you want a masterclass in producing a bestseller, there are worse places to start; but disappointment because his earlier books show he's capable of more ambitious writing and of creating more imaginative stories.

The book is about a murder committed inside the Big Brother house, neatly fictionalised for this book. It's satire rather than comedy, so don't expect to chuckle much. The time zones jump around, and Elton's desire to withold the name of the victim for the first third of the book makes for some contrived writing. At times it feels padded. But it's a page-turner, easy to read, with some spot-on descriptions of the ghastly characters you see on shows like Big Brother. You get the feeling Elton churned this out pretty quickly, but as long as you read it pretty quickly too you'll be entertained if not impressed.

I've started reading books again on the tube, so I'm going to start reviewing them on here, partly as a reminder to myself of the books I've read. If you're watching The Apprentice, you can also see my review for Alan Sugar's book that accompanied series one. 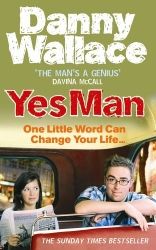 First up for a new review, then, is Danny Wallace's book 'The Yes Man', which I read at the turn of the year.

We have Tony Hawks to blame or credit for books like this, depending on your viewpoint. Since he walked around Ireland with a fridge, there's been no shortage of people doing ker-azy things and then writing books about them.

Danny Wallace previously travelled the world with Dave Gorman, trying to meet other people called Dave Gorman. He also set up a cult in his book Join Me. For this book, 'The Yes Man', Wallace decided to agree to do whatever anyone asked of him. The best bits are when he says 'yes' to seeing his friends more, meets new people and challenges himself at work. The worst bit is where he pretends to believe that a 419 spam email is genuine and somebody really does want his help transferring money out of Africa. As he gets all excited and travels to Holland, you know he's doing stupid stuff just so he can write a book about it. These books work best when there's an element of silliness, but an air of sincerity too (as in Tony Hawks' first two books).

If you like the idea of 'The Yes Man', you'll enjoy reading it. The adventure draws you in, it's laugh-out-loud funny at times and Wallace has a talent for observation. He's mangled the truth enough to give it a proper story arc, so it doesn't get repetitive. And the ending is genuinely touching. If nothing else, the book will make you wonder how your own life would change if you said 'yes' more.