Prince at the O2: Joy in repetition

The greatest start to a show ever: the lights go out, the crowd goes wild, and a spotlight picks out four men in suits. As they march into the arena, through the audience and through the stage door, they play some mad ragtime tune on the horns. By the time they emerge on the stage at the centre of the hall, the place is already going wild. And Prince isn't even here yet. 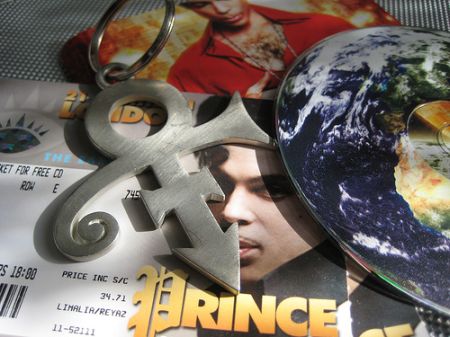 This was the second of six Prince concerts I attended this summer, and it included the song that came to symbolise the whole tour for me: 'Joy in Repetition'. In the time it took to perform 'Joy', he could have played two or three hits. But he went with what the fans would love, a relatively obscure but popular album track from 1990. The lyrics were changed too: 'Four letter words will not be heard on this stage tonight', he promised. The bad boy era is over.

Billing the show as 'the greatest hits for the last time' was mischievous, then. He wasn't ripping through the singles for the casual fans, so much as playing his best tracks and attempting to entice new listeners to them.

Nor did the new album 'Planet Earth' get much of a look in, even though everyone there was getting a copy for free and had probably already got one from the newspaper giveaway. In fact, after the first night, he hardly played anything from the new album except for 'Guitar'. You can't help wondering just how much he loves 'Planet Earth', and whether that was a factor in his decision to give it away. Let's not forget he played 'Jughead' on the Diamonds and Pearls tour, after all.

The set was peppered with cover versions, including 'Le Freak', 'Come Together', 'What a Wonderful World', 'Crazy' and 'Your Song'. These were perhaps an attempt to create a show that could appeal even to those who had never heard a Prince song, and also afforded him the opportunity to pop downstairs for a drink and a costume change while the band played without him. After a few nights, though, I didn't feel I needed to hear 'Crazy' ever again, much as I loved Shelby's singing on it.

Prince claimed he'd rehearsed 150 songs, which would be seven unique songs for each of 21 nights. He clearly didn't do that. Most of the setlists were built around a core of songs with a few surprises thrown in. A blistering 'I feel 4u/Controversy' pairing was played every night I went and was even used to open the final show. 'Purple Rain' was played every night, perhaps a concession to the casual fans. Opening the concert with it (as he did twice when I went) seemed to kill the atmosphere stone dead (too slow, too soon), but at least he'd got it out of the way. I wasn't really feeling that song until the final night, although to his credit every performance of it sounded improvised and new.

So, how to get through the back catalogue and send the punters home happy? How about sampling some of your old singles and playing the samples? The first night I saw him do this, he went over to the keyboard and triggered a sample of a song like 'Sign of the Times' just long enough for the crowd to flip out. Then he walked away saying 'y'all can't handle me'. Kinda funny. But not very. He could have played (ie, properly played) a song or two in the time he spent winding everybody up. But as the tour evolved, he started to sing on top of the samples and this part of the show made more sense. It was a way to play tracks that the current band wouldn't be ideal for (including 'Sign of the Times'), and to keep it spontaneous. Even if it did seem ill at ease with Prince calling out 'this is real music, people!' and 'you can't do this on a computer!' during the horn improvisations later.

The piano set, where he played properly and sang along, was much more successful. Among the most exciting three seconds of a concert ever was when he sang 'Until the end of time' and let a piano rendition of 'Adore' unfold for the first time. The final night's set with 'The Beautiful Ones' showed he can still do the scream, too.

For lapsed fans, there were plenty of treats. Most of Purple Rain got an outing, including a cheeky playback of the riff to 'Darling Nikki'. 'Sign of the Times' got plenty of love, too with a rocked-up version of 'U got the Look' a highlight. 'Kiss' was presented as the ultimate hit most nights, with Prince teasing the audience by naming other songs he might play before trumping them all with that famous jangly riff. 'Girls & Boys' and 'Sometimes it Snows in April' got a frequent airing too. If you were a fan between 1984 and 1987, you were welcome here.

There were also new songs to discover, for me at least. The now-deleted 'Gold Experience' album had passed me by when it came out, but a stunning performance of 'Shhh' inspired me to get it on ebay. Many who were there before me consider it to be his greatest album of the 90s and I can see why now.

Was it worth going six times? Definitely. I only planned to go twice and then kept adding tickets as they became available. VIP tickets for the first night went on sale on the same day for the standard £31.21 (instead of the £235 our neighbours were charged). Up close, the view was fantastic. Seeing his expressions (and those of his charming dancers The Twinz) set up the show for the nights we were more distant. Playing in the round meant that any seats in the Lower Tier had a great view. Although he tended to play towards the pointy end of the symbol-shaped stage, on the night we were behind the band, he came around to see us plenty of times. The only disappointing night was when we were in the upper tier - high enough up to touch the girders in the roof. The atmosphere was dead because the crowd around us couldn't really be arsed to enjoy themselves. That's the downside of playing on such a big scale: you get the kind of people who'd rather buy a hotdog than listen to the legendary Maceo Parker do a solo. It was nice to see the whole stage at once, though.

Every night was special. I saw Prince play bass on the only night he did that, saw a rare acoustic guitar set, saw him play electric guitar, keyboards and samples. I heard 'Joy in Repetition', 'When U Were Mine' and 'Anotherloverholenyohead' on the only nights they were performed in the main show. I heard all the songs he did on this tour except for a few, and so many of them mean so much to me. I didn't go to a Prince concert just to be entertained: I went to be moved, and I was.

I was lucky Prince chose my home city as his European base for this summer. And that I was able to experience so much of it, from the opening chords of 'Purple Rain' that first night, through over ten hours of stage time, to the closing notes of 'Girls & Boys'. After the final show, I made my way up to bed, exhausted but happy, by the light of a purple glowstick.

Nice piece, Sean. It captured the range of what we saw very well. The final night was one of the best concerts I've been to, for all sorts of reasons - the build-up during the week (as the glowstick plan was hatched by those great people at prince.org), finding out that Sky News would broadcast part of the gig, then being there when the lights went out and 20,000 glowsticks were waved in the air. Great as they were too, the other 5 nights we saw seemed like a rehearsal for this last night. My top moments from the last night were the Twinz spray painting '21' on P's back during one of the encores, and after joking about him playing it a few minutes before, getting to hear 'When You Were Mine'. What a summer - and thanks for your part in making it possible.
Mark.

Hi Mark. Don't think I would have gone to so many of them if we hadn't egged each other on, so thanks for joining me for all those gigs too.