Radiohead: Is DRM somewhere over In Rainbows?

Radiohead is letting fans decide how much they want to pay for the new album 'In Rainbows'. The 'honesty box' approach will enable the band to reach out to new listeners or lapsed fans, who might be prepared to buy the album for a few pounds but would never buy it as a new release CD. If people download it for a penny, Radiohead presumably makes a short term loss because of the cost of hosting the files and serving the sale. But the band has set no minimum price. You can download for free if you like. The band, like Prince and The Charlatans, presumably sees the merit in giving away music to build an audience for shows and other projects. 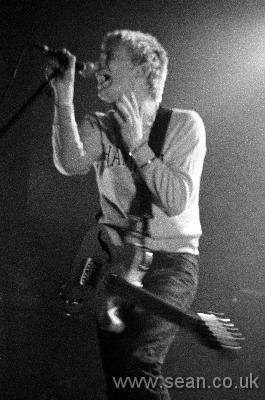 My photo from 1995 when The Bends was released. See more photos from this concert

NME says its readers are planning to pay an average of a fiver, which reflects the true value of most albums in this post-Fopp and post-ebay era.

As well as the download, there is a box set that includes the album on vinyl, CD and download (wot, no tape?) along with artwork and extra tracks. That costs forty quid. Clearly this will become a desirable item and many will discover Radiohead's music later and want to acquire one, but I'm not sure how much the value of this item will climb from its already steep price. This package will enable the band to keep most of the value that usually goes into the dealers' pockets when genuine special editions are traded at record fairs.

This time there is no record label, so anything you pay Radiohead over and above the cost of sale is profit to the band. If I pay them three quid for the new album, that's probably a couple of quid more than they got when I bought each of their major label albums.

So why haven't I placed an order for the album yet? I've been a fan since the early days. 'Kid A' is one of my favourite albums ever - one of the few I can loop over and over again.

The problem is that there's no indication of what format the digital album will be in. Will it work with my iPod? Will I be restricted from copying to another iPod if I get one? Can I burn it to CD to play in the car? It might only last as long as Radiohead's website does. That happened with Prince's digital store - try reactivating any songs bought from him in Windows Media Player format, and they won't work because Prince turned off the authentication server when he redesigned his website. Fans who have acquired new computers or audio devices can no longer play the music they've bought on them.

If the Radiohead downloads are good quality MP3s, that's great. But they shouldn't really expect people to part with money and preorder an album without telling them where it will play and how it will work. I care about that more than the track names. The concept of a Radiohead album I understand - it's over 30 minutes of music by Radiohead, probably split into songs. What I need to know is whether it will work, and whether it will still work when I want to play it years later. In that sense, the vinyl's a much safer bet.

The album's out on Monday, so those who have taken the gamble will find out then what format's on offer, and the word will doubtless spread. Until then, buyer beware.

If they're not high bitrate DRM-free MP3s, or FLAC, then I'm paying "free".

Otherwise, I'm paying a fair price. Trouble is, I'm having a terrible time deciding what a fair price is. Â£10 in Fopp used to get you all the track on a CD you could touch and hold, along with some nice packaging. Â£5 got you the same thing, only for older music (often, classics you just knew were going to be good).

What is a bundle of bytes worth to me? Especially when there's nobody to glare at me for being a cheapskate. I honestly don't know.

It does introduce all the social awkwardness of tipping at restaurants to buying music - how much is fair and appropriate?

I reckon a fiver is about right for me. I buy more old albums than new lately, so it's what I'm used to paying. There's no physical CD and there are fewer middlemen so the band can make a return on its investment much sooner than when working with a record label.

If it's DRM protected, though, I really will just go without. I can't be faffed with using broken products, even if they're free. I'll listen to something else instead.

Just got an email saying my activation code to download the files will be sent tomorrow. They are definitely DRM free - great news - and will come as a 48MB zip file. Files will be 10 x 160kbps MP3s.

Thanks, Kim. It's great to hear that the files are good quality and aren't crippled with DRM.

It was still a bit cheeky for them to ask people for money for them without making clear what they were selling, though.

Now I know the score, I'll probably place an order.

Now there are hints that there will be a proper CD release too.

Since I'm likely to buy that, I'm edging my price down to Â£3.