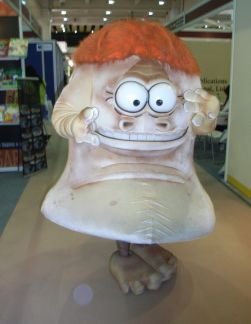 It was interesting to see how digital books were received at the fair. There was an area at the back of the hall given over to ebooks and digital publishing, and the seminars there were packed out. But it seemed to be led by the technology, rather than the content. There were plenty of firms who could help you to repurpose and distribute your content for mobile platforms (including the iPhone and Sony Reader), but I didn't notice anybody promoting digital content.

I didn't see any discussion about how ebooks can be different to print books. A certain amount of this is built into the device (eg searchability), but there is lots of potential to create new types of content based on the written word. Mindsportlive is developing iPhone apps based on its card packs, including '52 Ways to Beat Stress', but it was very much the exception.

It's partly the nature of shows like this that means major publishers would sideline their digital offerings. If you're negotiating rights, a printed book looks more impressive. Experienced publishers can get a measure of the content quickly. With ebooks, you can't tell how big they are, how well proofread they are in the middle, whether the book's consistently structured and so on without flicking through a lot of virtual pages. There's not a 'flick through until something catches my eye' button on any of the devices I've seen. Also, since the ebooks are often sold directly, they probably don't belong at a show that's partly about negotiating print book distribution and sales with intermediaries.

One company from Russia has an interesting proposition for interactive physical products - it markets hardback comic books for adults, with an enclosed music CD and CD-Rom. On the CD-Rom is a Flash animation that brings the comic book to life, and the CD contains atmospheric music that goes with the story. The project has been led by the music, with the creator being a musician first and commissioning illustration to expand on his work, which is an interesting way to create value at a time when it's increasingly difficult to sell music. For more information, check out the Ylotana website.

The Espresso Book Machine for printing on demand attracted a lot of attention. The Blackwell bookshop in Charing Cross Road will now be able to print books on demand using the machine, which was demonstrated at the fair. The device is a great way to increase effective footage in an expensive store, and it means many books need never go out of print. But it also transforms the bookseller into a book distributor. Surely the point of a bookshop is that you can browse and discover new titles you wouldn't have otherwise read? Isn't the idea that the bookshop can sell you books you didn't already know about? Print on demand is likely to require the shopper to ask for a specific book to be printed, although it is theoretically possible for displays to be mounted to showcase print-on-demand books, enabling infinite sales based on one shelf copy.

Other news from the show: Simon Pegg's writing a book for publication in October (hurrah!). It's an autobiography/memoir (err... okay). Enid Blyton is coming back from the dead with six new stories being ghostwritten in her (presumably trademarked) name. She wrote over 700 stories when she was alive, so you wouldn't think there would be a need for this. I wonder whether we'll see the day when John LennonTM releases a new album? Perhaps we have more respect for the personal creativity of songwriters than we do of book authors. Or perhaps it just needs another fifty years before The Beatles, Pink Floyd, Led Zepellin and Abba become brand names attached to ghostwritten work.

While at the show, I got some useful feedback on my novel University of Death from successful self-publishers, including Pauline Rowson, who writes and publishes crime fiction and business books. She has given me some great ideas for how I can make the book (or my next book) more marketable. Shows like this are always a good opportunity to pick up new ideas - I came back home with more ideas than I know what to do with.

thanks for mentioning the psychology training cards.

Hope you are well.

I Look to speaking soon,

Hi Sam. thanks for dropping in!